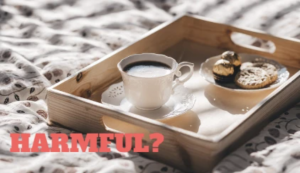 We have been consuming caffeine for centuries, and many types of research have been done about it. But is caffeine harmful? Caffeine is a stimulant substance that can be found in natural sources, coffee and tea are the main sources. As a matter of fact, there are 60 sources of caffeine in the world.

SO WHAT DO WE KNOW? IS CAFFEINE HARMFUL?

There is a controversy about the consumption of caffeine and specifically to products with added caffeine. You can find it added to jelly beans, marshmallows, sunflower seeds and other snacks. Something that is being concerned by the FDA since children and adolescents are consuming them daily. And might be overconsuming it without knowing caffeine effects on high doses in such ages.

Moderations is the first rule that specialists recommend. 400 mg per day according to the FDA. And an 8oz cup of regular coffee has 95-165 mg of caffeine, according to the Mayo Clinic, so now you know how many cups are good for you. Also, studies have demonstrated that caffeine is unlikely to cause adverse effects when is consumed in moderation.

Moreover, there are several clinical studies supporting that caffeine-containing products have antioxidants, which are associated with cancer prevention and heart health. Even “scientists are reporting an in-depth analysis of how the caffeine in coffee, tea, and other foods seems to protect against conditions such as Alzheimer’s disease and heart disease on the most fundamental levels”, as expressed by ACS’ The Journal of Physical Chemistry B in their weekly press.

There are feelings of comfort, joy, and sociability associated with the consumption of caffeine. A cup of coffee taste better if shared with friends and family, right?

BUT WHAT ABOUT WHEN WE READ THAT IT’S ADDICTIVE?

Caffeine is classified as a drug because it stimulates the central nervous system, causing increased alertness. However, there are rare cases of control loss among caffeine consumers. And the process of reducing or stopping its consumption does not imply difficulty. So, for those who want a little help on their duties, it can be helpful. But, keep in mind that it doesn’t affect everyone the same way. Caffeine has addictive properties but it is not considered a dangerously addictive substance.

For coffee drinkers, a world without a cup of coffee is a world in black and white. So, for all our community take the FDA fact into consideration and have moderation as your virtue.  Enjoy every moment of happiness that your daily caffeine serving can give you.